Attack of the Giant Robot Chickens

Why did the chicken cross the road? TO TAKE OVER THE WORLD!!! The city of Aberdeen is being terrorised by giant robot chickens who want to peck out every last sign of human resistance. The streets are empty, the adults have vanished — and those left behind are fighting for survival. Jesse and his friends are desperate to save their families and stop the feathered fiends. They hatch a master plan…but can a gang of kids REALLY defeat an army of angry robot chickens?
This book won the 2015 Scottish Children’s Book Award.  For more information on the book you can visit the Floris website by clicking the front cover or you can buy it from Amazon by clicking here.

Revenge of the Giant Robot Chickens

Not too long ago the children of Aberdeen struck a blow against the tyranny of their oppressors — an army of giant robot chickens. But the chickens were not defeated and now the city’s warring factions have formed a council hoping to keep their chicken overlords at bay. But there’s a new robot chicken on the block, the Chickenator! When the new chicken starts to target council members, pecking them up one by one, Rayna suspects fowl play. How are the chickens tracking council members down so precisely? Could there be a spy in the council? Meanwhile, Jesse tries to hatch a plan to crack the chickens and set the human captives, including his older brother,  free. Who will have the last cluck?

For more information on the book you can visit the Floris website by clicking the front cover or you can buy it from Amazon by clicking here. 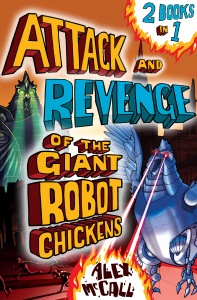 Why did the chicken cross the road?
TO TAKE OVER THE WORLD!

The city of Aberdeen has been reduced to a post-apocalyptic wasteland in the wake of invasion and giant robot chickens roam empty streets, seeking to peck out every last sign of human egg-sistence. Fighting for survival and desperate to save their family and friends, Jesse and Rayna must pluck up their courage and hatch a plan…

Want to buy both my books but don’t have the shelf space? Well you can buy them both in ebook format! Click on the cover to find out more or go here to buy it from Amazon.

I’m currently working on a collection of fairy tales that are being posted on this website once a month. They can all by read separately but some of them are connected.

January’s is The Ice Maiden, a tale of a great evil arising in the north and a hero setting out to stop it.

February’s is The Man and The Sword, the story of a swordsman and the bond with his blade.

March’s story, is The Djinn and the Bronze Pan, the story of the last hope for a small village.

April is The Girl with the Beaten Bronze Hair. This is a culmination of previous tales and is about the creator of great and terrible things. This one comes with a Trigger Warning as it includes some upsetting scenes with an animal in pain and some gore.

May is The Boy Who Angered The Story, about a boy hunted by storm clouds.

June’s story, When Winter Met Summer, settles upon what happens after the story is finished.

July’s is The Lonely Lighthouse, which brings us back to the lighthouse from The Man and The Sword and how’s that devices are only as good as the will that drives them.

August’s story is Kaolinite and Other Gems. This is the story of what happened after Eos left her village and about a great treasure being found.

September’s story is The Girl and her Kitten, which is about a young girl lost in the woods with her cat. It will form a short duology with the following month’s story.

October completes the previous month’s duology with The Kitten and her Girl. It’s about a cat that never gets lost in woods, with her human.

November’s The Searching Sword picks up from where The Lonely Lighthouse ends.

The final fairy tale is Season’s End. This wraps up the year and ties into most of the other stories so I recommend you read them first.